"While this building was being constructed Cosimo de'Medici decided to build his own palace, and he therefore explained his intentions to Filippo (Brunelleschi), who put everything else aside and made for Cosimo a very beautiful and large model of this palace, which Filippo wanted to place in the piazza facing San Lorenzo, isolated on every side. Filippo's virtuosity was so clearly displayed in this model that it seemed too luxurious and grand to Cosimo, and, more to avoid envy than the expense, he gave up the idea of using Filippo's plan. While Filippo was working on the model, he used to thank fate for the opportunity of building such a home--something he had desired to do for many years--and for having come upon someone who wanted and was able to build it. But then when he learned of Cosimo's decision not to go on with the project he angrily broke his model into a thousand pieces. And Cosimo was very sorry not to have followed Filippo's plan, for he lated constructed the other palace, and he used to say that he had never conversed with a man of greater courage and intelligence than Filippo..." Vasari, "The Lives of the Artists", pp. 140-141

This passage reminded me of my trip to Italy, where a few years ago I visited a Medici Villa of Petraia. This is from my travel journal from the trip. It's a little... condensed in the middle but a pretty good representation. When you turn around from this view you can see the whole valley, the Duomo in the distance, and even the river Arno. 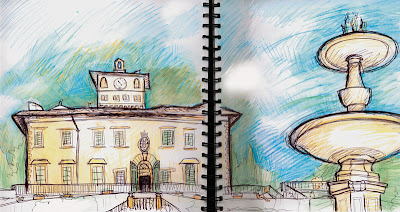