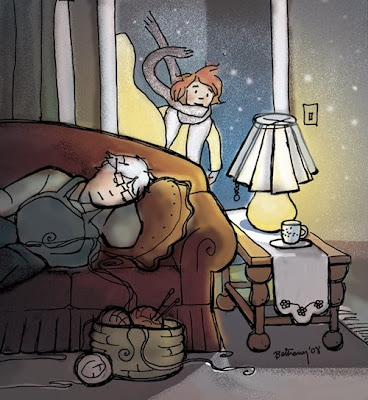 She opened the heavy front door as quietly as she could and yet a loud creak reverberated through her Grandma's front room. A cold winter's draft forced its way in behind her and directed her attention toward the one lonely lamp lighting the space. She heard a small moan from behind the couch and realized regretfully that her Grandma had indeed waited up for her. She knew there was nothing she could say so she turned out the light, crept up to her bed in the attic and cried herself to sleep.
Posted by bekava at 10/18/2008 02:29:00 PM
Labels: figurative, sketchbook

Nice atmosphere; poor Grandma.
But if she went to sleep the worry wasn't huge.

Well done. You did a great job with the light in this.

Why did she cry herself to sleep?