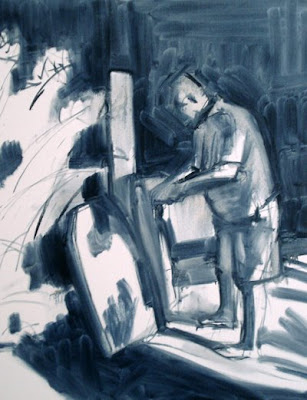 An oil painting in progress for my Situation and Environment class with Zhaoming Wu. This is the first stage. The line drawing is done with a small flat brush and then I blocked in the major values with a large flat brush. The paint I used is a mixture of ultramarine blue and van dyke brown. I 'watered down' the paint with Gamsol to cover large areas thinly.

I've started using Gamsol as a medium instead of Turpentine or Turpenoid because it has almost no smell compared to others and is much easier on the environment. In addition it much less flammable. So far I'm liking it as it feels thinner and more like painting with water than a medium.
Posted by bekava at 4/02/2009 11:39:00 AM
Labels: figurative, process

Looks cool Bethaninja!
I like the tones in this stage!